I haven’t written on here for ages so figured it was about time that I wrote a post, especially since I was up earlier than usual this morning. It is another beautiful sunny day here in SLC but snow is predicted for later in the week. When I caught up with John Boeren for lunch a couple of weeks ago, he told me that I must go and hear the Tabernacle Choir on a Sunday morning.  So, last Sunday, I did just that – the doors open at 8.30am and are closed at 9.15am as the performance is televised live at 9.30am.  That means no coughing, sneezing, chatting, phone rings etc between 9.30 and 10am.  I arrived in plenty of time and found a seat towards the back.  I could also have gone to one of the seats upstairs but liked the view from where I was.  There are about 150 people in the choir – you must retire from the choir at the age of 60 and you must live within 100 miles of Salt Lake City.  The performance was wonderful but I have to say that the orchestra overwhelmed the singing at times.  The final song was just the choir and it was superb.  You could have heard a pin drop in the performance (other than the songs of course) as people really heeded the No Noise rule. For about half the audience, it was their first time hearing the choir and there seemed to be many visitors. 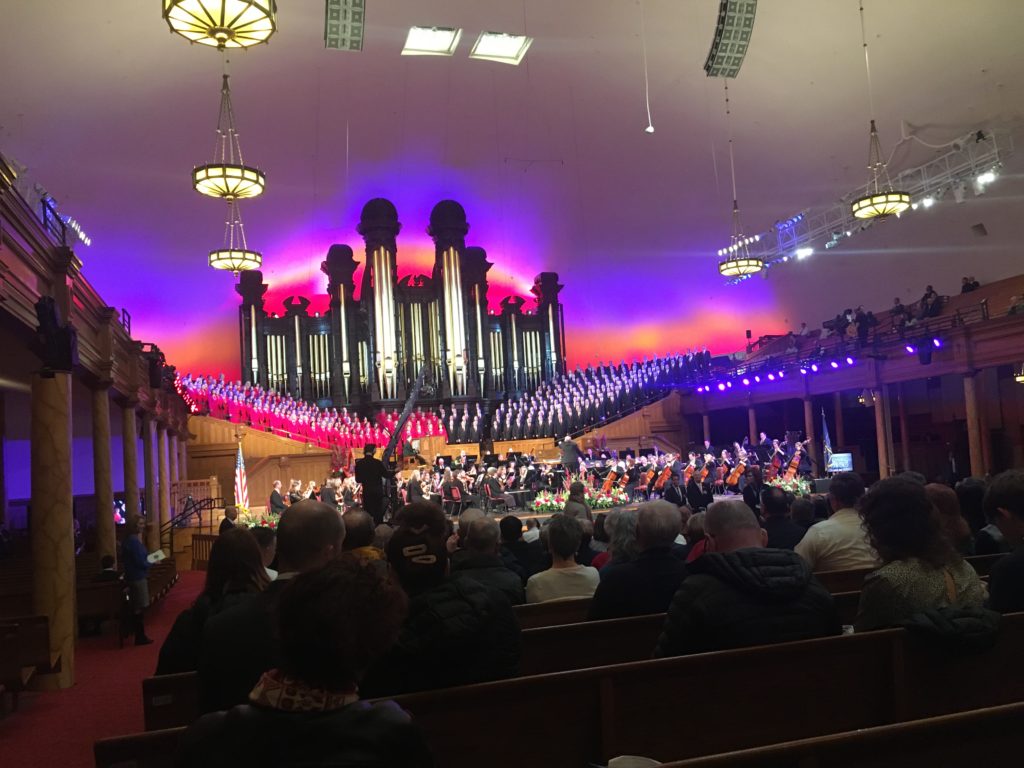 While waiting for the performance to begin, a young girl walked past with an Australian badge on her jumper so I gave her a thumbs up.  She came back to me a few minutes later to chat.  I did laugh when she asked where I was from and I said Brisbane and her response was – Beenleigh!!  The world really is a very small place.

I have been trying to write but have been bogged down with the footnoting formats.  Most of what I need to include are not provided in examples and some sites are at odds with what is recommended by SAG and Chicago eg The National Archives (UK).  I really should be further ahead and I can see time getting away from me in the last week that I am here as it is already looking to be quite social. 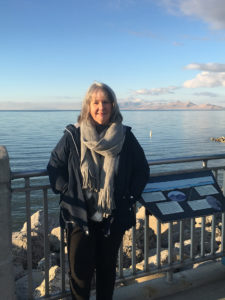 Antelope Island is in the background

Yesterday, a friend of a GSQ member came to pick me up for a drive and dinner.  Lyn lives here in Salt Lake City so it was wonderful of her to take the time to show me around.  We drove out to the great salt lake and because it was a beautiful clear day, I managed to take some worthwhile photos. 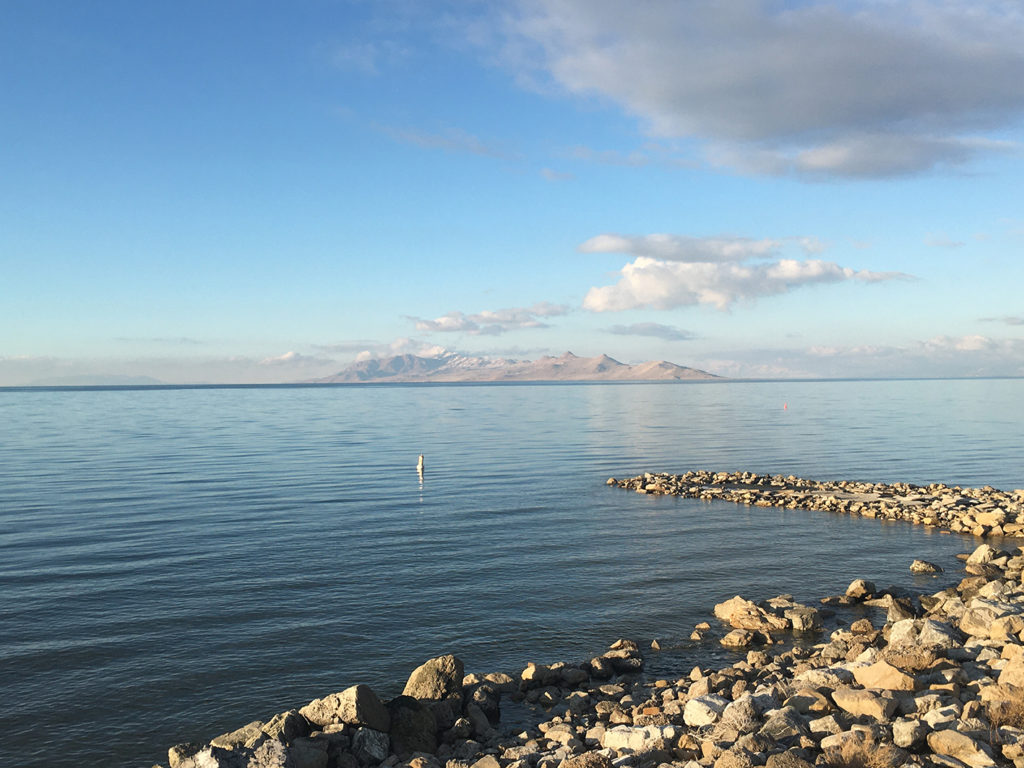 Looking across the lake towards Antelope Island

The salt lake is known as America’s Dead Sea, because like the Dead Sea, you can float easily.  There are no fish in the lake but plenty of brine shrimp which apparently are not eaten but are used as food by the birds in the area. Apparently brine flies abound but there were none yesterday nor seagulls (which is Utah’s official State bird). The largest island in the lake is Antelope and it is home to bison.  There is a marina with numerous boats but I wonder what you can do other than sailing.  Being a lover of fishing, it seems like a waste to me. 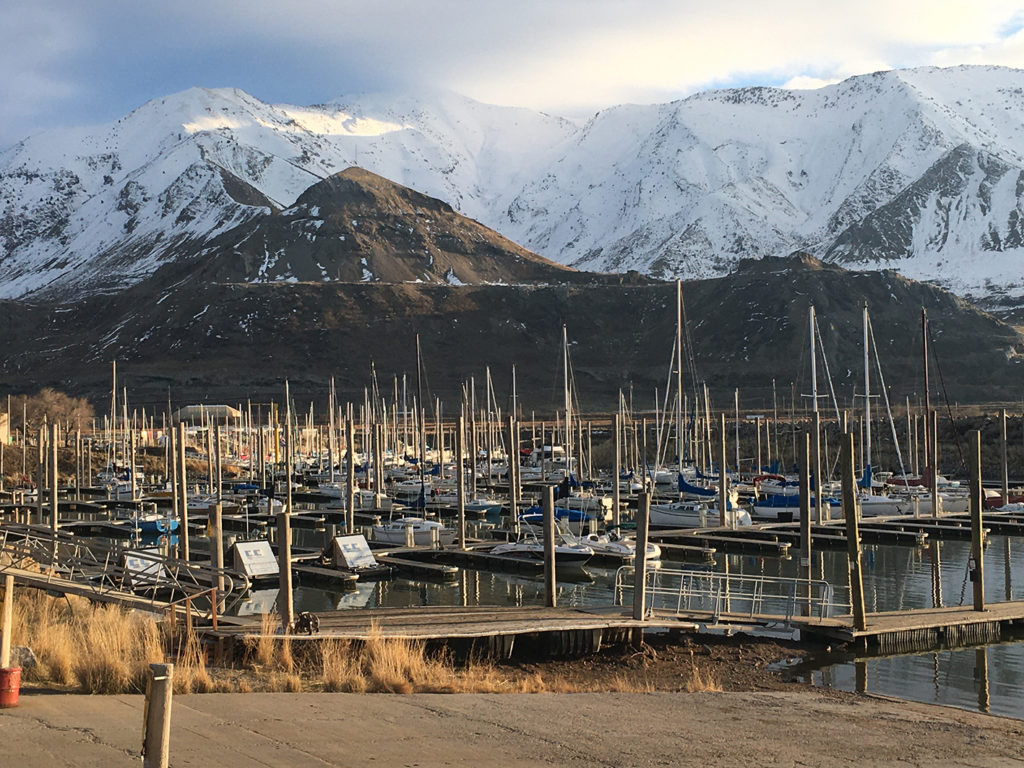 The marina with snow-capped mountains in the background – just seems wrong!

You can drive across to Antelope Island but we didn’t do that as Lyn wanted to show me some of the little mining towns near the Bingham Canyon copper mine and smelter – Magna and Copperton.

In Copperton, I was very lucky to see three deer stroll across the road – not a great photo as it was getting dark but you can see them.  Even Lyn was excited for me. 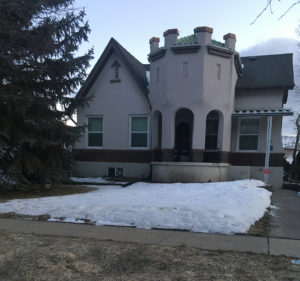 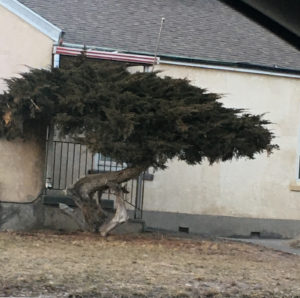 Found a great bonsai tree for Kirby in Copperton – wonder if they will let me dig it out? 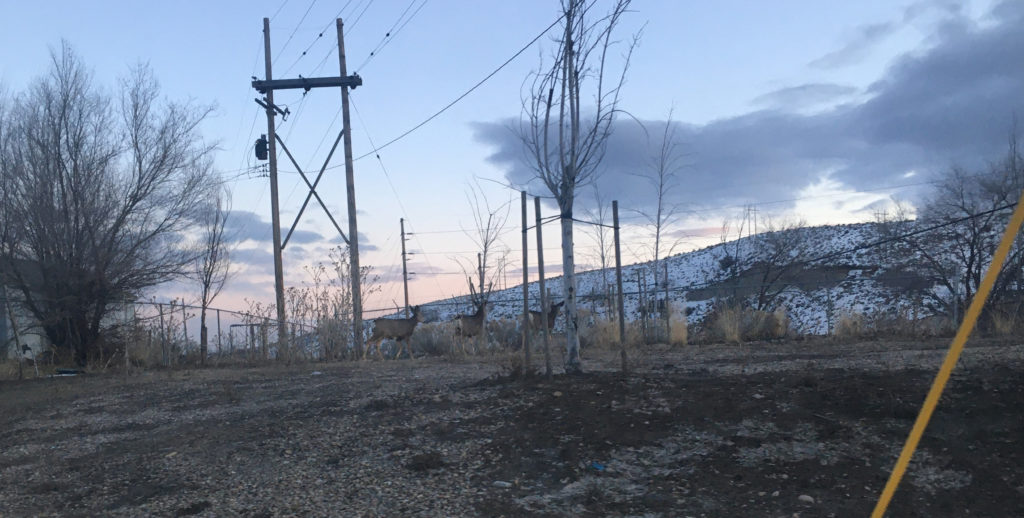 By now it was dark so we headed back to Salt Lake City to have a BBQ meal at Famous Daves.  I had pork ribs without the bones and Cajun fries which were quite nice. A wonderful afternoon and meal on a beautiful day.

Apologies that the photos are not lining up nicely.