↓
Home→London→More research plus some retail therapy

It seems ages since I wrote a post here but I have been putting stuff on Facebook and on Ancestor Discovery. I made Monday a rest day and spent most of it researching all of the records at The National Archives which might include a reference to my ggg grandfather James Phillips. On Tuesday, I was up bright and early to catch the tube out to Kew Gardens. This is a very easy trip to make – there are a few stops but it doesn’t take too long and the carriages are usually not full as it is heading out of London.

I had submitted a form online for my Reader’s Ticket thinking it had expired. On arrival, I was told that it was still current until 2021 and if I wanted a replacement card, I would need to pay £5! So I rushed back downstairs to the lockers, rummaged through my handbag and found the old card – the one that had expired was for the British Library and not TNA.

I had to wait until 9.30am before ordering my records and then it took about another 45 minutes for them to arrive. So I spent more time on the catalogue checking what records I had viewed in previous visits, which ones needed to be ordered again and what I might need to do to find out more about James’ early life.

Part of the research room on the 1st floor at TNA

This was a marathon day as I didn’t leave the Archives until 5ish and walked back to the station only to find that there were problems on the District line and the trains were delayed for at lest 30 minutes or more. People were being directed to take an overground train to Olympia or similar and then change again. What a nightmare! A trip that would normally take about 40 minutes took over 90 minutes and necessitated a change of train 4 times and 3 different lines! It was peak hour too so every train was packed to the rafters – not sure how the bodies just keep piling in but they did. I have to say that everyone was very polite – for so many people on each train, it was quiet and I doubt that there was any groping going on.

For Wednesday I had pre-ordered records so could start work as soon as the rooms were opened at 9am – a major bonus as I wanted to leave a little earlier to meet Judy Lofthouse for dinner. I ended up with almost the same number of research hours anyway as I didn’t leave until after 2.30pm, back to the apartment at 3.30pm (no train dramas at this time) and then on a tube again just after 6pm to meet Judy at the Earl’s Court station.

We walked to a small French restaurant in Hogarth Place as Judy had eaten there on the Monday night with a friend. It was a lovely night and we wandered back to her hotel so I could take some things home for her as she didn’t have quite enough room for some RootsTech bits and pieces. 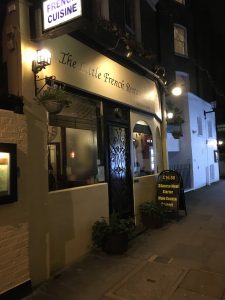 Yesterday was spent at Westfield White City.  I think that Carindale or Garden City are big shopping centres but they pale in comparison to this one.  It is massive with every high end store you could wish to visit plus numerous others.  When I arrived there was a long queue on the top floor and when I asked in a shop what it was for, the reply was that people were waiting to get into the Pokemon store!  I know – who would have thought that?  It was like that the whole time I was there.  There was a queue roped off with security guards only letting in a few people at a time.

I visited the Apple store – just like Carindale and just as packed with people.

I managed to find a quite nice coat at Debenhams, plus bits and pieces in other shops and headed back to West Kensington around 2.30, loot in hand. Unfortunately, no boots as the ones I wanted weren’t in my size so this may mean a trip to Oxford Street on Sunday.

Today is another sojourn out to TNA and I shall see what tomorrow holds.  The weather has been terrific – yesterday was chilly but there was a beautiful blue sky as you can see in this photo of my street, taken from the front of the apartment. 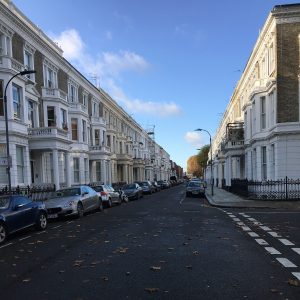